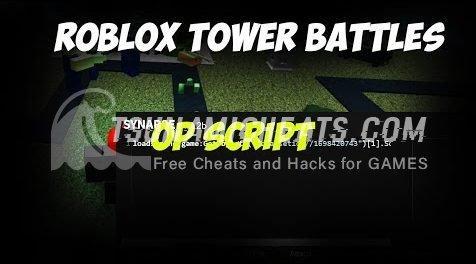 Tower battles is a fairly classic mode for the Roblox universe. In it, the user is offered to defend their buildings from rivals who will attack in waves. The more waves you can withstand, the better, and vice versa. The main task is to win a particular match. Immediately it is worth saying that this is a rather complex, from a strategic point of view, game. Therefore, you will have to come up with your own tactics on how to correctly place the pieces and not hit the face in the dirt. Only the most desperate and those who are really well prepared will be able to win, for example, they installed the so-called tower battles script on their computer.

Script functions:
Immediately it should be said that the script on tower battles gives the player a tangible advantage in the match. This is due to the presence of two functions:

Auto Farm - automatic extraction of all necessary resources. The program will begin to arrange the shapes independently and use them to protect the buildings.
Infinite Money - another utility has at its disposal the ability to make an unlimited supply. As mentioned earlier, she will begin to arrange the pieces and play on her own. Due to this, it will be able to quickly gain a huge supply of resources. Only the user will have to choose in what direction to spend them and how exactly.